Written by
Filed under
Events and Shows, Running a Small Business, trade shows
Previous
Where do I even begin? I feel like I've been whirled around inside a pressure cooker for the last three weeks of my life!

I'll go back to Chicago, June 26th when we left for the Fountain Square Art Fest in Evanston, IL - it took us over 9 hours to drive there due to many annoying traffic jams. We set up in the middle of the street, and had to make fast decisions about how to maximize our set up where people could come in on either side of the booth. Then, we had some tasty dinner at the misleadingly named Flat Top Grill - doesn't that sound like a place to get a panini or a burger? Turns out, it was one of those Mongolian Grill type of places and it was really good, but a little difficult to make my own stir fry after I was so fried from our extremely long day.

Anyway, the Fountain Square Show in Evanston that weekend was great. It was what craft shows are supposed to be like - lots of great people, great weather (except for the scary wind gusts blowing everything around), and great sales! I find that my most successful shows tend to be street festivals like this one, but of course that's not always the case. 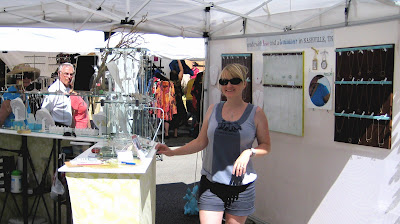 in the booth, slightly different setup that worked great

I knew that the Atlanta Gift show and the San Francisco Renegade Craft Fair were rapidly approaching, and I was feeling a little like a black hole was getting closer and closer to swallowing me up! I kept telling myself "Get through the Chicago show" and then I could focus on my next two big shows. So when we returned home Monday night, I only had one week to prepare, plus a day and a half between the two shows to get ready for San Francisco. Getting ready for a wholesale show is intense - you have to have one of everything made. You have to have the right number of catalogs, order forms, pens, tools, postcards, business cards, signage, etc... And then you have to be very certain how you are going to display it all once you get there.

We give ourselves two days to set up our display at the show, but some people take 4 or 5 to set up their temporary display. Some of these displays get really inventive and elaborate, but that takes $$. Even my simple canvas displays made with felt and paint cost almost $400. For canvases and felt, I tell you! That doesn't even include the cost of the jewelry supplies, the foam core wall, the floor, the chairs, the catalogs, order forms, promos, etc! The first wholesale show I did cost me about $7000 before the hotel, advertising, and not including jewelry supplies. Seriously people. This is what it takes to bring Freshie & Zero to the masses. And then I get to spend about 4 or 5 thousand more each wholesale show I do. Fun, right? Who wouldn't sign up for this? 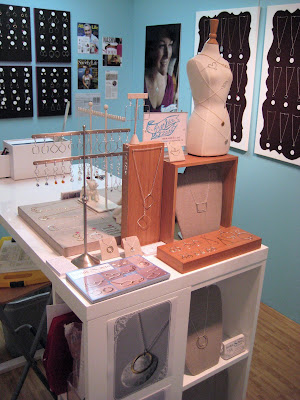 Anyway, I'm bitching a little but it's really just the money part that is kind of staggering. So when people ask me for a discount at a craft show, my first reaction is to school them on how much money I have paid to be standing before them. Then I just smile and say "I'm sorry, I don't offer discounts at shows". But that's a whole other blog post all together and wholesale accounts never ask for deals (well, almost never).

I digress. We miraculously got prepared for Atlanta on time (many late nights of hammering and lots of help from Greg!) and set up was pretty easy, except for the fact that there was a huge air duct obstructing my ceiling, which I knew about beforehand but I did not realize that it would obstruct my track lights I brought. So I had to pay the floor rate ($200!!!!) to rent 6 track lights. Sigh.

I really wanted this show to be a big success, so I spent a little more on advertising this go-round. I did a pre-show mailing to every business that had ever contacted me, which was the least expensive form of advertising I did. Then I rented a little floor space in one of the Mart buildings where you can set up a "vignette" display of your products. It sounded a little steep ($672 for 9 square feet) but I took a deep breath and booked it. Then of course, I had to buy a table, fabric, displays for that space but it was all worth it. A very healthy amount of customers came into my booth who said they saw my display. I am 80% sure that I would book it again. I keep going back and forth - I'm trying to gather a tally of how many sales were directly or indirectly related to the vignette. And if I did it again, should I revamp it a little and change it up? Mo money mo money?

I also took out my ad in the Market Magazine again, which is the best advertising dollars that could ever be spent. So worth it every time. It's over $1000 but if your ad is good, it will more than pay for itself, and quickly too! 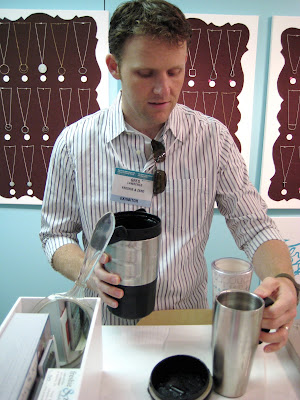 Greg prepares our morning coffee in our little booth.

You never know who you'll be next to at the show, either, and the vibe of your aisle can really affect your show and your sales. In January, I was across from a very corporate booth that held many sales meetings for their reps across the country. It was a little distracting, and they were really rude to their neighbors, which was totally unnecessary. So I got myself moved to a different spot this time and I loved it! The aisle was really narrow, so people had to get close to your stuff. And my neighbors were awesome! I met Leigh and her mother Susan of Leighelena, who makes beautiful enamel jewelry and who was also heading to Renegade San Fran. Then Karin and Kat of KBD Studio who were also very cool and sold me some of their groovy handmade clothes. I also met Caroline Pate who is another jewelry designer living in Nashville. It was her first wholesale show and she experienced all the mart has to offer - meeting nice people and fending off nasty comments from naysayers. I also chatted with Maria of Lua Chea again and she's a total sweetheart, and her jewelry line is so fun and made of recycled materials! I met many more wonderful people, too many to list here!

So after all of my preparation and advertising, I ended up selling less than I sold in January! What??!! You have to look at the big picture, people, and overall, it was more successful. I opened up mostly new accounts, when in January a lot of my sales were reorders. Freshie & Zero is now officially in 24 states (once I get all of those orders shipped!). I got a lot of solid leads, and Greg and I learned so much about marketing and how many things we were already doing right, but also some things that needed improvement. We even went to a couple of seminars to try and become better business people! We left the mart totally happy and ready to tackle new ground.... and then we had to get ready for San Francisco in two days... to be continued...