Written by
Filed under
Events and Shows
Previous
So, one of my nearest and dearest friends who I've been been playing phone tag with for months finally caught me on the phone! It was just like high school all over again - we talked like we had just seen each other yesterday and talked, and talked... for an hour and twenty minutes! That's probably the longest conversation I've had all year! It was so fun to catch up, but weird that our conversations have shifted from boys and homework to savings accounts and marital housekeeping duties.

Second, there was a LOT of lightning tonight in Nashville and it was scary because it was very frequent and very close to my front door. I happened to watch the news tonight and saw that a fire (not confirmed that it was lightning that started it) heavily damaged the Werthan Mills Lofts - the same ones where my wedding photographer has a studio! Yikes! My first thought was "oh no, all of Chuck's pictures" then I thought "he better have mine backed up!" Fortunately, the fire only affected one of the buildings that no one happened to be living in yet since it was still being finished. Fires are scary. It reminded me of the fire we had in my condo complex last year (one of the buildings next to mine had a massive fire and I watched in disbelief as the flames ate up people's homes). Maybe it's time to buy a backup hard drive for my Freshie & Zero files and store it elsewhere... 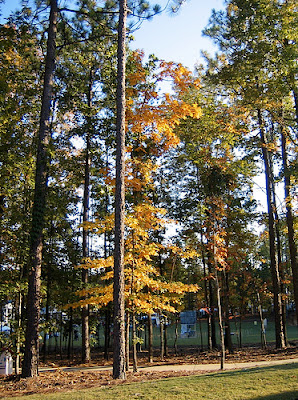 the view from our booth

Also, I went to a great craft show this weekend in Alabama - it was the Moss Rock Festival and it was so well organized, planned, and full of things to look at and buy! I was so impressed, and it was also successful sales wise, which is always nice. I met a talented ceramicist named Amy (her line is Olaria) that I traded necklaces with and bought one of her platters for a Christmas gift. 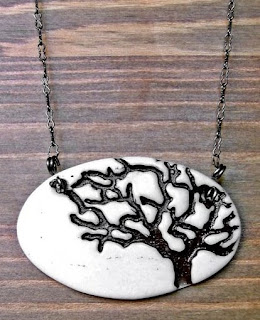 a necklace by Olaria from Birmingham, Al

I also saw an artist making wooden jewelry and wooden "art" which I thought was really pretty until I recognized a piece of scrapbook paper from Michael's being sold as an art piece! All I could think of was "Lame!!!" Granted, she had embellished it a little, and I heard her say something about sanding and varnishing, but it really was just a sheet of scrapbook paper glued onto a piece of wood and sold as art. Wow.