Written by
Previous
The article posted below is found on Forbes website. It is kind of long, but it is an urgent call to action on a law that will negatively affect this country that goes into effect on February 10th. It is about the dangerous new law affecting anyone who makes children's products - from toys to stationery to hats to shoes to jewelry. In short, this law requires anyone who produces children's products to get them certified as lead free using expensive testing that most small businesses could never afford. Up until a couple of weeks ago, it also affected any used toys or clothing sold at thrift stores but thankfully they amended the law due to consumer and retailer protesting. If you haven't heard of this legislation, please visit these links and write, call, or email your congress representatives! This site makes it super easy to do so: http://capwiz.com/americanapparel/issues/alert/?alertid=12274476

Other good sites to visit on the subject:
http://www.fashion-incubator.com/archive/dont-throw-yourself-under-the-cpsia-bus/
http://blog.buyhandmade.org/?cat=4

Here's an etsy search to raise awareness for items that will be illegal to sell after Feb 10th without proper lead testing. Each listing is priced at the actual cost to test the product - I saw some ranging from $6,000 -$15,000!! If this law passes, you can say goodbye to products like these: 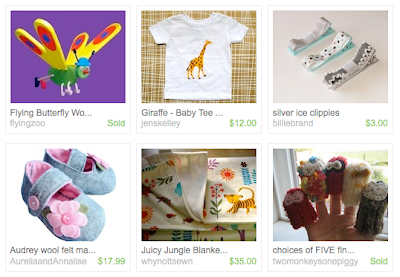 Below is the Forbes article:

If someone you know volunteers at a thrift store or crochets baby hats for the crafts site Etsy or favors handmade wooden toys as a baby shower gift, you've probably been hearing the alarms about the Consumer Product Safety Improvement Act (CPSIA).

Hailed almost universally on its passage last year--it passed the Senate 89 to three and the House by 424 to one, with Ron Paul the lone dissenter--CPSIA is now shaping up as a calamity for businesses and an epic failure of regulation, threatening to wipe out tens of thousands of small makers of children's items from coast to coast, and taking a particular toll on the handcrafted and creative, the small-production-run and sideline at-home business, not to mention struggling retailers. How could this have happened?

Congress passed CPSIA in a frenzy of self-congratulation following last year's overblown panic over Chinese toys with lead paint. Washington's consumer and environmentalist lobbies used the occasion to tack on some other long-sought legislative goals, including a ban on phthalates used to soften plastic.

The law's provisions were billed as stringent, something applauded by high-minded commentators as a way to force the Mattels and Fisher-Prices of the world to keep more careful watch on the supply chains of their Chinese factories.

Barbed with penalties that include felony prison time and fines of $100,000, the law goes into effect in stages; one key deadline is Feb. 10, when it becomes unlawful to ship goods for sale that have not been tested. Eventually, new kids' goods will all have to be subjected to more stringent "third-party" testing, and it will be unlawful to give away untested inventory even for free.

The first thing to note is that we're not just talking about toys here. With few exceptions, the law covers all products intended primarily for children under 12. That includes clothing, fabric and textile goods of all kinds: hats, shoes, diapers, hair bands, sports pennants, Scouting patches, local school-logo gear and so on.

And paper goods: books, flash cards, board games, baseball cards, kits for home schoolers, party supplies and the like. And sporting equipment, outdoor gear, bikes, backpacks and telescopes. And furnishings for kids' rooms.

And videogame cartridges and audio books. And specialized assistive and therapeutic gear used by disabled and autistic kids.

Again with relatively few exceptions, makers of these goods can't rely only on materials known to be unproblematic (natural dyed yarn, local wood) or that come from reputable local suppliers, or even ones that are certified organic.

Instead they must put a sample item from each lot of goods through testing after complete assembly, and the testing must be applied to each component. For a given hand-knitted sweater, for example, one might have to pay not just, say, $150 for the first test, but added-on charges for each component beyond the first: a button or snap, yarn of a second color, a care label, maybe a ribbon or stitching--with each color of stitching thread having to be tested separately.

Suddenly the bill is more like $1,000--and that's just to test the one style and size. The same sweater in a larger size, or with a different button or clasp, would need a new round of tests--not just on the button or clasp, but on the whole garment. The maker of a kids' telescope (with no suspected problems) was quoted a $24,000 testing estimate, on a product with only $32,000 in annual sales.

Could it get worse? Yes, it could. Contrary to some reports, thrift and secondhand stores are not exempt from the law. Although (unlike creators of new goods) they aren't obliged to test the items they stock, they are exposed to liability and fines if any goods on their shelves (or a component button, bolt, binding, etc.) are found to test above the (very low) thresholds being phased in.

Nor does it get them off the hook to say an older product's noncompliance with the new standards wasn't something they knew or should have known about (let alone to say anyone was harmed; the whole controversy from start to finish has gone on with precious little showing of real-world harm to American kids from most of the goods being banned).

Thrift store managers, often volunteers themselves, have no way to guess whether every grommet or zipper on a kids' jacket or ink on an old jigsaw puzzle box or some plastic component of Mom's old roller skates would pass muster.

"The reality is that all this stuff will be dumped in the landfill," predicted Adele Meyer, executive director of the National Association of Resale and Thrift Shops. Among the biggest losers if that happens: poorer parents who might start having to buy kids' winter coats new at $30 rather than used at $5 or $10.

And even worse: Since the law does not exempt books, children's' sections at libraries and bookstores will, at minimum, face price hikes on newly acquired titles and, at worse, may have to rethink older holdings.

After all, no one has the slightest idea how many future violations lie hidden in the stacks and few want to play a guessing game about how seriously officialdom will view illegality. "Either they take all the children's books off the shelves," Associate Executive Director Emily Sheketoff of the American Library Association told the Boston Phoenix, "or they ban children from the library."

Antique dolls? Old model-car collections? Musical instruments? Vintage bicycles? Some will go underground in private collectors' clubs, others will be tossed on the bonfires of the new Cultural Revolution.

A traditional attraction on the heritage festival circuit is the kids' dance or performance troupe in ethnic, pioneer or frontier garb, often handcrafted with the sort of ornate detail (beads, pendants, lace inserts, etc.) that will not be practical to test.

The same goes for Native American kids' cherished moccasins, buckskins and powwow gear. Making matters worse, many foreign producers of craft and small-batch toys and clothes, chary of liability under the law, are planning to exit the American market entirely, a step already taken by three German toymakers.

In recent weeks, as thousands of crafters and retailers began to compare notes and realize that they would soon be left with stocks of unsalable merchandise, forced out of business or both, the protests have begun to mount: alarm-raising at hundreds of blogs and forums, a torrent of Twitter discussion, YouTube videos, endangered-products lists, Facebook groups and so forth.

A group called Handmade Toy Alliance is calling attention to the law's burdens in that area. Booksellers are mobilizing. Yet prominent consumer groups have continued to defend even the law's more extreme applications, and their spokespersons are dismissive of public outrage. "I haven't heard a single legitimate concern yet," Public Citizen's David Arkush wrote last month.

The consumer groups--and the congressional offices of key CPSIA backers Bobby Rush, D-Ill., and Henry Waxman, D-Calif.--have blamed opposition to the law on "misinformation" and "confusion."

Defenders of the law point out, for example, that item-by-item enforcement at thrift shops is unlikely to be an enforcement priority any time soon for the Consumer Product Safety Commission's 100 field investigators.

The thing is, few librarians, eBay (nasdaq: EBAY - news - people ) sellers or knitters want to be told that they're outlaws but at too small-fry a level to attract the authorities' attention. They want to be legal.

Besides, the law grants enforcement authority not only to the CPSC but to the 50 state attorneys general, which means anyone who ships nationally, small fry or not, is at the mercy of whomever turns out to be the least reasonable attorney general, a post for which there is always considerable competition.

As CPSIA opponents mobilize, the phrase "unintended consequences" is often heard. Part of the irony, after all, is that the Hasbros and Targets, with their standardization and economies of scale, can afford to adapt to such rules as part of their business plan, while the sorts of enterprises that initially looked to benefit most from the Chinese toy scare--local, organic and so forth--are also the ones who find it hardest to comply.

But the failure here runs deeper. This was not some enactment slipped through in the dead of night: It was one of the most highly publicized pieces of legislation to pass Congress last year.

And yet now it appears precious few lawmakers took the time to check what was in the bill, while precious few in the press (which ran countless let's-pass-a-law articles) cared to raise even the most basic questions about what the law was going to require.

Yes, something's being exposed as systematically defective here. But it's not the contents of our kids' toy chests. It's the way we make public policy.

Walter Olson is a senior fellow at the Manhattan Institute and the author of The Rule of Lawyers and other books. He edits Overlawyered.com.